About Us » History of St. Louise Parish School

St. Louise Parish School opened in September, 1961, with grades one through six and a student enrollment of 425. Enrollment increased by 125 students in the following two years and expansion of facilities became essential.  An additional seven-classroom wing was completed for the fall of 1963. Grade seven was added in 1962 and became the first graduating class in 1964.  By 1966 there were three classrooms each for grades one through five; two for sixth and seventh; and one for eighth.  The highest  enrollment for the school occurred in 1968-69 at 766 students. It's worth noting that this occurred during the years when Archbishops mandated that all Catholic parents must enroll their children in Catholic schools. The Archbishops no longer mandate this.  Enrollment  leveled off at St. Louise in the 1980’s, with exactly two classrooms established for each grade level. A pre-kindergarten class for 4-year-olds was added in  2011.

Today, the number of students enrolled at St. Louise is over 350, with a student body that is approximately 90% Catholic. The principal strives to achieve gender balance in each class and to not exceed a class load of more than 26 students. Many class sizes are in the teens, providing much opportunity for 1-on-1 time with student and teacher. The ethnic minority make-up of the school population increased beginning in the 1990s and is currently around 40%, making it the largest ethnic minority population of all the Catholic schools on the Eastside.

St. Louise School has over 200 families representing a range of occupations and educational backgrounds. Parents’ professions range from service-oriented to high tech positions, and education experiences range from high school diplomas to doctorate degrees. The majority of students reside in two-parent households which are members of St. Louise Parish.

St. Louise's inaugural principal for its first four years was Sister Basil, CSJ (Congregation of the Sisters of St. Joseph; Sr. Basil was also known as Johanna Vogelsan ). The next three principals, who served one to two year terms, were Sr. Aurelia, CSJ (AKA Marguerite Morrissey), Sr. Eleanor, CSJ (AKA Eleanor Rosellini), and Sr. Marita, CSJ (AKA Marilyn Mead).  In 1969, the first lay principal of St. Louise School was hired - John Bowers.  Following his nine-year leadership were Ann Pizelo, Wayne Lago, and Mary Dispenza, who each served from one-to-five years as principal.  The current principal, Dan Fitzpatrick, came to St. Louise in 1988 as vice-principal and became the head administrator in the 1989-90 school year. He is the longest serving principal at one location among the 74 schools in the Seattle Archdiocese.

Approximately one-third of the school facilities are from the original 1960-64 building projects, and two-thirds are from the 2010-17 new-construction projects. This new-building project began in 2010 with the majority of the 50,000 square feet 2-story building completed at that time – consisting of homerooms and dedicated rooms for science, art, computer, and library classes. Three additional phases of smaller construction over the next seven years completed all construction of the main building. The original school building continues to hold the music room, the drama program, the pre-kindergarten program, the student support teacher, and areas for our OT and Speech Therapy services.

Physical education classes have a full-sized gymnasium on the west side of the campus. The parish hall and church on the south end of the campus can easily hold the entire student body for assemblies and liturgies. There are dedicated rooms for science, art, music, computer, reading, math, and library classes. The playground area is large enough for safe and functional recesses, especially considering recesses usually consist of one-third of the student body at a time. A parish staff of one maintenance supervisor and five custodians care for the upkeep of the parish and school facilities. School facilities are shared with an active parish that utilizes classrooms many evenings and every Saturday and Sunday. Campus security was enhanced in recent years with the addition of exterior security cameras and easily lockable doors.

Technology in both the original school rooms and the newer school rooms include interactive flat panel displays, and sound systems with teacher microphones. Wireless access throughout the school buildings benefit students in their research and group-project work.

Through the institution of the first School Board in the Seattle Archdiocese (later called the School Commission), a conscious effort was begun in 1967 to increase the quality of education by limiting the class size and establishing other policies and standards in line with the Archdiocesan Catholic Schools Office.  Under the direction of many strong administrators, teachers, and parents, St. Louise has continued to be a leader in the Archdiocesan school system.  Besides being the first school with a School Board, St. Louise School was also one of the first three elementary schools in the Archdiocese to be accredited, developed policy handbooks that have served as models for other schools, and created some of the first and most flourishing endowments and scholarships.  Active parent involvement has been a hallmark of this school as is evidenced by the strong Parents’ Club and fund-raising that all parents support to keep annual tuition increases to a minimum.

Although certain changes have been made over the years as staff and faculty have changed, the school values remain the same.  Alumni visiting would not be surprised to find the following still in place:  promoting service to others, high academic standards, and motivated students.  The school continues to be a Catholic community dedicated to its students’ spiritual and academic growth.

St. Louise School completed a self-study and received its first accreditation and religious certification from the National Association of Accredited Schools and the Western Catholic Educational Association in 1994, becoming one of the first of three Seattle Archdiocesan elementary schools to undertake this process.  In 2004, 2011, and 2017, St. Louise again completed a self-study and received re-accreditation. The school’s mission statement and philosophy, originally developed by the 1990-91 School Commission and faculty, were updated in 1994, in 2002, and again in 2010. The Student Learning Expectations (SLEs), which are the school’s expectations that an eighth grader should know, understand, value, and be able to do by the time they graduate from St. Louise School, were created as part of the school’s re-accreditation process in 2004 and were updated in 2010 and again in 2016. 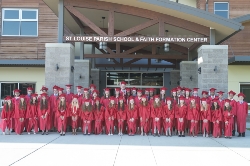